This article originally appeared in The Peak, the SFU student newspaper
September 09, 2013 | By Leah Bjornson | Photos By Ryan Prox 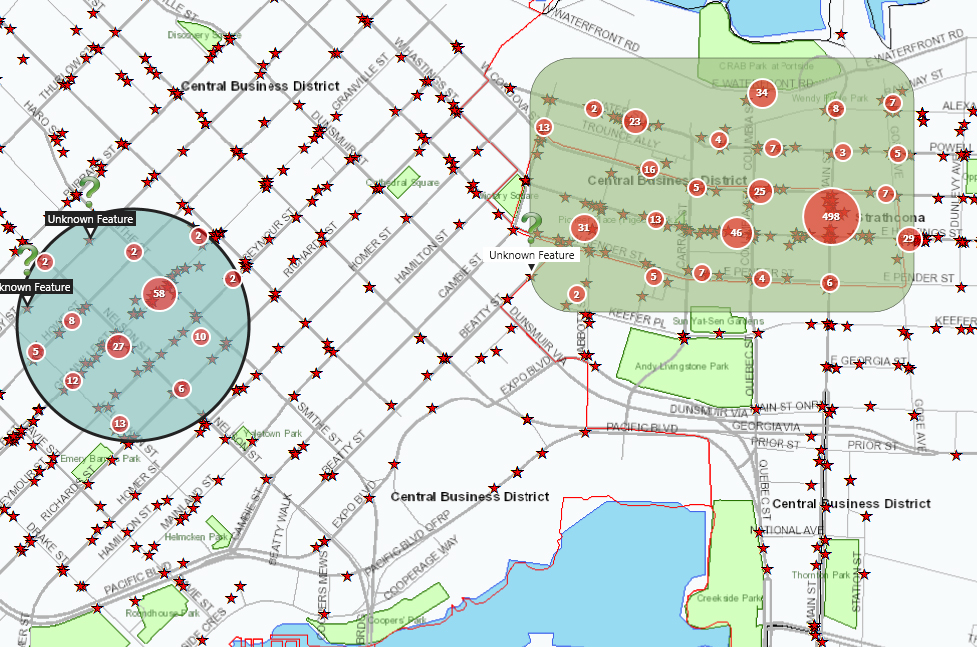 This geo-spatial chart, used in the course, illustrates incidents of violence and property crime in Downtown Vancouver.

An online course offered by SFU’s School of Criminology this fall will give students the opportunity to practice their investigative skills in a one-of-a-kind virtual forensic criminal intelligence analysis lab.

Curt Griffiths, SFU professor of criminology, and one of the creators of the course, spoke to its uniqueness in an interview with The Peak. “This is one of the only instances in North America where a university has been given access to these analytical tools to use in the classroom,” said Griffiths. “Usually they’re reserved for the FBI, the RCMP, totally within the policing realm.”

The online course, Crim 417 — Introduction to Crime and Intelligence Analysis: Theory and Practice — utilizes tools such as ESRI ArcMap Crime Analyst and IBM i2 Analyst Notebook, software that is generally only made available to law enforcement agencies in North America. Griffiths estimated that the value of the donated software is around $500,000.

“Usually [this technology is] reserved for the FBI, the RCMP.”

In addition to the generosity of multiple vendors, the acquisition of the equipment was made possible through the help of the course instructor, Ryan Prox of the Vancouver Police Department (VPD). Special Constable and Analytic Services Coordinator for the VPD, Prox became involved after Griffiths suggested the students could benefit from a more hands-on approach to learning.

“Dr. Griffiths would have his Critical Issues in Policing class come by the VPD every once in a while and I’d give a guest lecture presentation on analytics and touch on some of the basic training I provide our Vancouver Police analysts,” said Prox in an interview with The Peak. “And at some point he said ‘You know, you have a course here that might appeal to criminology students, you should consider adapting this for SFU’.”

For Prox and Griffiths alike, this course is an essential stepping block for students interested in careers in law enforcement, especially in the VPD, which Prox has described as “cutting-edge globally.”

Commented Prox, “Right now from a law enforcement perspective we have a difficult time finding qualified candidates that have not only the academic background, but some of the hands-on, practical skills that you need for working in the field.”

The SFU course is meant to give students just that by providing them with challenges they would face if they were working in a real police department. Using historical cases that have already gone to court and been fully disclosed, the students will retroactively investigate real crimes and use police technology to solve them.

The same technology was used by Prox in 2010 to help catch a serial rapist.

“The software runs algorithms that evaluate the nature of the relationships that each person has and how many interactions they have with different people and how they fit within the hierarchical structure of a terrorist cell or gang,” explained Prox. “It can identify who the key people are within an organized structure, and from that it can help narrow the focus to the main targets of an investigation far quicker than through traditional techniques.”

The same technology was used by Prox in 2010 to help catch a serial rapist who had been targeting young girls around the Lower Mainland since the 1990s. Using a method known as “geo-profiling,” the program spat out the name Ibata Hexamer, with 99.7 per cent certainty, within six weeks. Hexamer pleaded guilty to four counts of sexual assault last August.

For Griffiths, this example of real-world application shows just how important this course (and others like it) could be for SFU Criminology students.

“It’s opening up for students the opportunity to gain skill sets that are directly applicable for when they graduate.” said Griffiths. “The idea also is for our students who take these courses to be able to write an international certification exam . . . which would allow them to go to work as a crime analyst in any police service in the world.”

In the future, Griffiths hopes to offer similar courses in the undergraduate curriculum that will focus on the area in more detail.